When is a Blackbird not a Black Bird - Pantoum 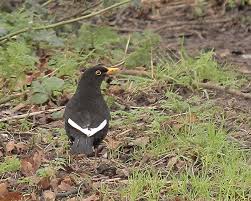 For some time now I have been catching sight of a blackbird that has a flash of white around the tail feathers. Yesterday I decided to look up any information there might be about this phenomenon. The following comes from the British Trust for Ornithology website. http://www.bto.org/

Across the country, people have been seeing Blackbirds with strange white markings. The condition, typically referred to as ‘leucism’, is one of a number of plumage abnormalities to have been reported through the BTO Abnormal Plumage Survey, preliminary results from which have just been published. In less than a month, the survey has clocked up nearly 700 sightings, encompassing more than 35 different species. Three quarters of records have been of leucistic birds and, of these, nearly half have been Blackbirds. Leucistic birds may be confused with albino individuals, but the latter have pink, instead of dark eyes, and only account for 12% of survey records to date.It is not yet clear why Blackbirds appear to be particularly affected. It could be that they are unusually susceptible to the condition. However, being black or, in the case of female Blackbirds dark brown, any light-coloured feathers show up particularly clearly. Indeed, several other species with all-black, or mostly black, plumage have been spotted with white feathers fairly often, including Carrion Crow (49 records) and Jackdaw (40).

from the British Trust for Ornithology January 2012

A few years ago a persistent blackbird came pecking at the window. My old border collie, Gwen was in the final days of her life. I used the old myth about birds tapping windows being an omen of death, to write this poem in the form of a pantoum.

The blackbird came to call the week she died,
knocking his golden beak against the pane.
Insistent to be heard he left his mark
in streaks of hieroglyphs across the glass.

Knocking his golden beak against the pane,
I thought the storm had sent the wind chimes wild.
In streaks of hieroglyphs across the glass,
I read his ragged black edged calling card.

I thought the storm had sent the wind chimes wild,
but tapping his urgent message was the bird.
I read his ragged black edged calling card.
I knew the time had come to bear the blow

but tapping his urgent message was the bird,
a script time writes and has the final word.
I knew the time had come to bear the blow
like death a deadline desperate to be met.

A script time writes and has the final word,
insistent to be heard he left his mark.
Like death a deadline desperate to be met,
the blackbird came to call the week she died.

The Pantoum tradition as a poem first appeared in , in the work of Ernest Fouinet in the nineteenth century. Victor Hugo and Charles Baudelaire made the form fashionable. The Pantoum's name and form derive from the Malayan pantun.  Historically, the Pantoum became popular in Europe and later in the nineteenth and especially the twentieth century.

- The lines are grouped into quatrains (4-line stanzas)
- Lines may be of any length.
- Pantoums can be written in free verse, metered or rhyme
- The final line of the Pantoum is the same as its first line (opinions differ on this)
- The Pantoum says everything twice.
- A Pantoum has any number of quatrains.


Although there is no length restriction to a pantoum, they are generally kept within a few verses - five to seven stanzas.
The pantoum can be very effective for conveying emotional subject matter.

This shows the pantoum's repeating format:

THE 2nd AND 4th LINES MOVE UP A POSITION IN EACH NEW STANZA
Ideally, the meaning of lines shifts when they are repeated although the words remain exactly the same: this can be done through punctuation, punning or re-contextualising. Each line means something slightly different in its second context.

The pantoum's repetition and circular quality give it a mystical chant like feeling. Its cut-up lines break down linear thought.
Posted by Jill Teague at 11:55