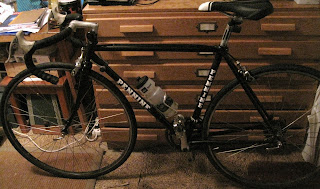 In 1990 my mother and father gave me birthday money to put towards a custom made road racing bike. I was living in West Yorkshire at the time and decided to use a based company called Pennine Cycles. I went into their workshop a couple of times for them to measure me and to choose components and a colour scheme. I was so excited the day I went to collect the bike. It was an absolute vision.

I had always had bikes as a child and teenager. I remember my first one – a metallic blue tricycle with a sizable boot at the back. It had an extending handle that my parents could hold onto as I rode along. My first two wheeler was a two- tone blue Raleigh and I remember my father teaching me to ride it – using the age old trick of promising not to let go and then of course letting go. What a metaphor. Yes, we can usually do more than we originally believe is possible.

I never really rode the Pennine cycle that much and when I moved back to I stored it in my cousin’s garage in. One night I dreamed that she had given it away and I woke up so angry that I determined to collect it when I next went down South. Unfortunately, the garage roof had sprung a leak and the bike looked a total wreck. I felt frustrated with myself and saddened. I was very close to taking it to the scrap yard.

Meanwhile, I was in at the time of the NYC triathlon and after watching the event I decided that I would like to give the triathlon a go. Then on returning home I met an acquaintance who was a keen cyclist and he introduced me to a cycling group. This led to the resurrection of the Pennine cycle. I had it re-sprayed and fitted with some new components. I had forgotten how exhilarating it felt like to ride.

I didn’t manage to get an entry for the NYC triathlon and since then they have changed the date of the event to earlier in July  and I am there each year for the end of July (probably for the best as a mile in the Hudson River never really appealed to me) but I really enjoy riding with the cycling group and I have, to date, completed four sprint triathlons in . 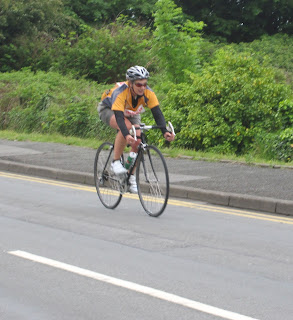