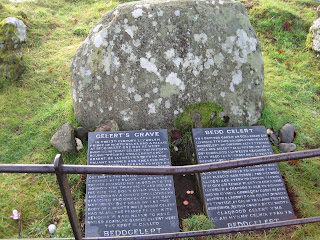 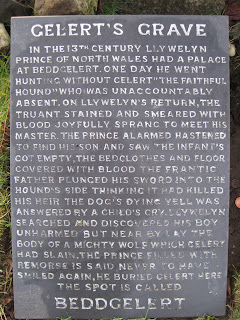 Today I took a friend to see Gelert's grave and sculpture in Beddgelert. I was told the legend of Gelert as a child. As well as being exceptionally poignant,  it is a story of outstanding unfairness.
The story, as written on the tombstone reads:
"In the 13th century Llewelyn, prince of , had a palace at Beddgelert. One day he went hunting without Gelert, "The Faithful Hound", who was unaccountably absent. On Llewelyn's return the truant, stained and smeared with blood, joyfully sprang to meet his master. The prince alarmed hastened to find his son, and saw the infant's cot empty, the bedclothes and floor covered with blood. The frantic father plunged his sword into the hound's side, thinking it had killed his heir. The dog's dying yell was answered by a child's cry. Llewelyn searched and discovered his boy unharmed, but near by lay the body of a mighty wolf which Gelert had slain.
The prince filled with remorse is said never to have smiled again. He buried Gelert here". 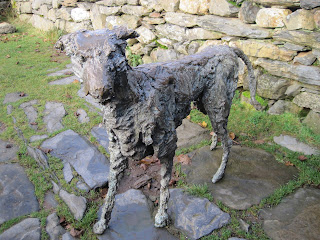 The Welsh phrase for "Fair Play" is "Chwarae Teg", and is I think, deeply ingrained in the Welsh consciousness. It certainly is in mine. It must also have been in my parents' too. They taught me to play numerous games, and whether it was ludo or street cricket, their maxim was "play fairly". Indeed my father was very prone to quoting those lines from poem Grantland Rice's poem, "Alumunus Football" -
"For when the One Great Scorer comes to mark against your name,
He writes - not that you won or lost - but how you played the Game."