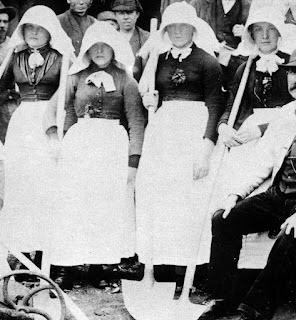 The first lines of D H Lawrence's poem "Terra Incognita" reads - "There are vast realms of consciousness still undreamed of/vast ranges of experience, like the humming of unseen harps."

I set myself a ten minute writing exercise with "Undreamed Of" as my starting point.

Those blinkered pit ponies that my paternal grandfather cared for down in the pitch black, both he and them released onto the mountains for just two weeks of the year. The Bal Maiden bonnet that his daughter wore as she crushed the copper from rocks in all Cornish weathers.

How to come up from the dark? How to  see through the wide angle lens of life when your eyes are sealed with your fate? How to rise from the ash and the dust? How to rid the mouth of the bitter bile, to find a voice in the the turmoil of survival, while grinding a living from the bones of dead matter.

Who was it that said dream small but live large?

A woman grasps the edge of her kitchen sink as the grey waste water drains away, and says, "I regret..."

Come up from the dark. Come in from the cold. Come forth into at least some sort of light that flashes and cracks the bulbs of despondency.

No to the pinhole camera of a life. In obscura.