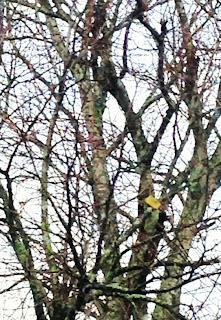 A few days ago I was working on the fourth floor of a building and feeling cut off from the world outside. I happened to look out of the window and see in the distance a tree with one last leaf clinging to its otherwise bare branches. I was struck by the mutability of leaves. I thought about which leaves let go and which cling on until the last, bearing the buffeting of the wind.


Losing leaves is a tree's strategy to survive.


In plant terms, senescence is an ordered and controlled series of events initiated in preparation for the tree's resting period. The final step in the process is called abscission. In response to the shortening day, hormones are produced that weaken the cells at the base of the leaf, forming something similar to a serrated edge. The wind does the rest. After abscission a protective layer of cells similar to scar tissue grows over the exposed area. The line of the abscission is also called the separation line.


So there is a tacit agreement between leaf and branch to lose and be lost.
Posted by Jill Teague at 15:53