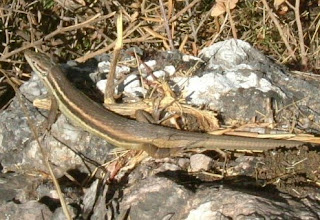 It seems like an age since we were in the wonderful Spanish sunshine. While walking in the mountains we saw lizards basking and understood their need to soak up the sun. Back home, after days of rain, the sun seemed unseasonal. I went into the garden to pick the last of the peas and there on the fencepost was a family of lizards - a mother and two babies. Desperate for warmth, they were head to tail, a circle of petroglyphs in relief. We were all suspended in the shared moment. I watched the rhythmic tic of the mother's heart. Then one of the babies loosed its grip - unhinged its four limbs and seemed to float down into the dark roots. I read that lizards have the ability to slow down their landing so that they don't harm themselves when they fall. Also it fascinates me that they have a predetermined fracture plane from the sixth vertebrae onward and can perfom self severance of the tail to survive. I thought of the lines from Eddi Reader's song "Simple Soul" - "if it hurts you, let it go".
Posted by Jill Teague at 09:35